A stone tower stands on the western edge of Wall Street, the cluster of structures that one finds by turning left where the paved road ends up Four Mile Canyon, exactly ten miles in all from the center of Boulder, Colorado. The tower is a remnant of a gold processing mill that was to be the beginning of a worker-owned mining empire, which would resolve once and for all the late nineteenth century’s violent, intractable conflicts between labor and capital, a model for the world to copy.

One doesn’t expect a skyscraper in a nowhere hill town. Less surprising is that the scheme didn’t work.

Charles W. Caryl first came to that spot in 1889, when the town was called Delphi, or perhaps Delphia. He would later re-baptize it after the district of his native New York that serves as capitalism’s capital, as if this gulch would be its replacement. He self-published in 1897 a book, New Era, which outlined his intentions by means of a Bellamy-esque drama, in which the New York elite come to be persuaded to support the undertaking. Its characters include Vanderbilts, Tolstoy, and Emma Goldman. Under Caryl’s portrait on the frontispiece, in which he wears a well-trimmed handlebar mustache between a pair of mutton chops, the caption reads, “One who dares to plan.”

It’s hard to tell mere plans from reality in a document like this. Yet the articles from New York and Colorado newspapers that constitute the book’s introduction were, I have found, actually published in those newspapers. They report that Caryl’s plan “is attracting the attention of labor advocates and persons of philanthropic mind all over the country,” with praise for his record so far as a mine owner. “This paradise on earth,” says another, elevating Caryl above Plato’s idealism, “is planned on a strictly business basis.” At the back of the book’s 192 pages are two foldouts—an artist’s depiction of the circular New Era City that the mines would spawn, and a technical schematic of it.

Caryl did manage to raise some Eastern money. We know this because various papers report in 1899 that he was being sued by 70-year-old Mary J. Williams of New York for the $130,000 she had invested in the effort. But by 1902, Caryl had liquidated the whole operation. The main buyers, from Boston, finished the mill he’d planned for, only for it to be sold in bankruptcy in 1907 and disassembled. Next to the empty mill tower remains Caryl’s assay office, now a museum open one day a month for most of the year.

“Thank God, it was only a dream,” writes local historian Delores S. Bailey, who married into a mining family that worked with Caryl and bought the assay house, where she lived for many years. “Caryl soon drifted out of sight, possibly to build another dream.”

Indeed. By 1903 Caryl could be found in Los Angeles, preaching (and selling) a metaphysical teaching called “vril.” Two years later he was back in Colorado, having established near Durango a vegan orphanage implicated in the starvation of thirteen children. When authorities arrested Caryl in 1912 for obscenity, his “Brotherhood of Light” reportedly had amassed 10,000 followers. (“Obscenity,” one biographer suspects, may have meant distributing birth-control literature.) In 1914 he was free again; he delivered a scientific lecture to the Boulder County Metal Mining Association.

Now I find myself at work trying to build a kind of cooperative commonwealth from Boulder County, a response to more recent conflicts between labor and capital, one that might become a model for elsewhere. We have no New York investors or gold mines, but there’s a study circle and a community radio show and a network of businesses. The ruins of Wall Street testify that such things have been tried before. What does Caryl himself testify to? I’m not sure whether to claim or disown him. 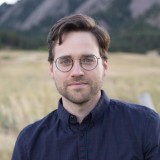 Nathan Schneider is an assistant professor of Media Studies at the University of Colorado Boulder, where he directs the Media Enterprise Design Lab.